My brother was talking about buying my Canon Digital IXUS 750 Camera off me. (or PowerShot SD550 for Americans) He had an identical camera and waterproof housing for it (this costs significantly more than the camera). But said waterproof housing had not been properly closed once...

My camera wasn't having any of that, and the next time I turned it on, it half-opened the lens, groaned, and said "E18". Bugger. Googling E18 turned up a few sites showing other people with the same problem, lots of other people: e18error.com, E18 Error on Wikipedia. It appears to be a generic error for lens problems in Canon cameras, and occurs so often that class action suits have been filed against Canon.

I read the tales of woe, and tried the suggested remedies of shaking, banging, prodding, and otherwise mauling my poor camera. Nothing helped. I put it in a pelican case and forgot about it for a few weeks.

Reading on, I discovered a few tales of brave owners disassembling and repairing their cameras, mostly successfully. As a geek, I knew I was going to have to give this a shot. I've taken things apart since I learned how to use a screwdriver, so I can normally put them back together again (these days), and they normally still work.

Eventually, I got around to this, last week. Nobody has posted disassembly instructions for any camera near my model, so I had to work it out for myself. Now, let's remedy that:

My camera's lens was open, and wouldn't move at all. Turning it on gave an E18 error. 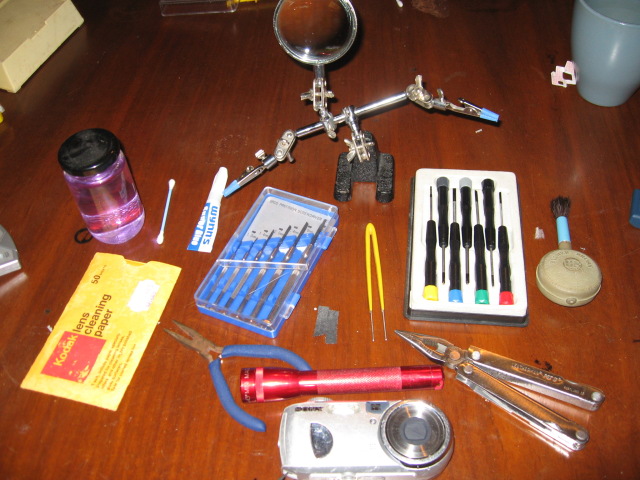 I'd recommend the following:

Warnings: You need to have a willingness to part with your patient's life. You also need to be aware that camera flash assemblies contain high-voltage capacitors, that usually hold a small residual charge. Stay well clear of them and their circuitry. If possible, discharge it as soon as you see it, with a heavy-duty resistor.

Tips: Lay out the removed parts in the order you disassembled them, together with their screws. That way you won't have the "left-over screw" problem or put things together in the wrong order.

Remove the battery and SD card. 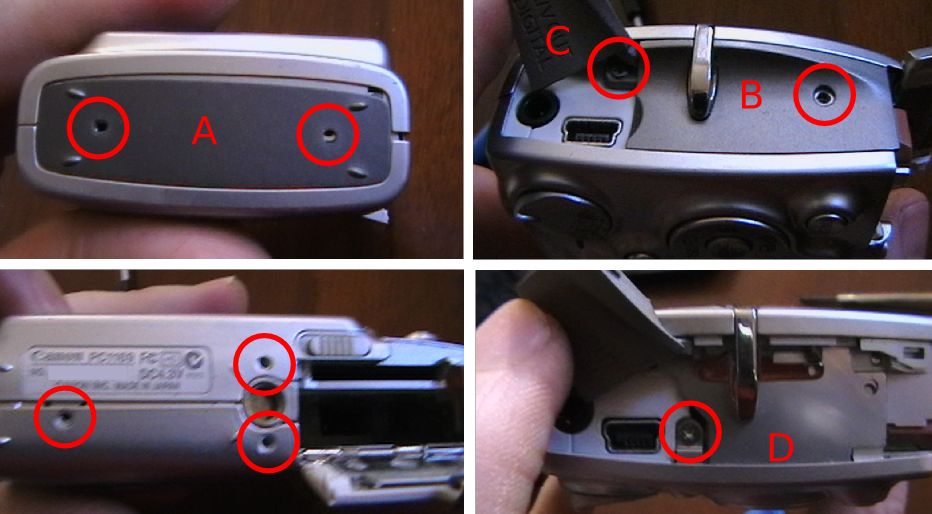 To remove the case, you need to undo all the exterior screws: 3 on the base, 2 on the left, and 2 on the right (one is under flap C). The side plate A is loose, and B is a plastic sheet that can be pulled out, revealing an additional screw. Flap C is attached to the body, not B. When reassembling, take care to insert lip D under the back panel.

There are no clips on the bottom or sides, but there are 3 along the top, between the front and back halves. One to the right of the shutter, two to the left. Pry up on the front half.

There should be a black O-ring on the outer part of the lens. Lift it off and store. 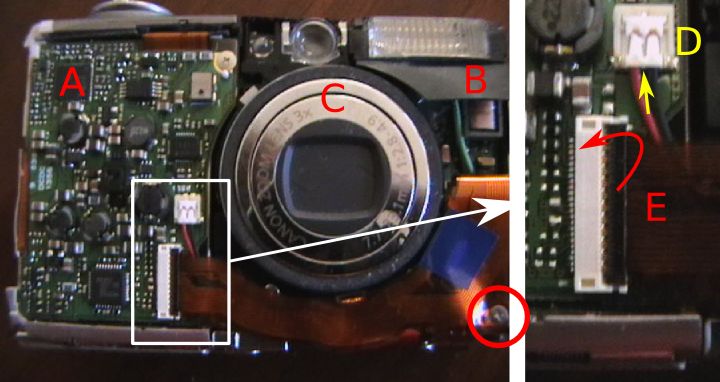 The three main modules are now visible. Motherboard and battery (A), Flash unit (B), and Optics (C). While we won't undo these connectors quite yet, as the LCD is currently attached to both sides, but this is a good opportunity to explain the connectors that you'll be encountering.

The ribbon cable E plugs into the white connector with a black lid. The black lid needs to be folded back for the ribbon to be removed. It simply pulls out along it's axis. To re-insert: open, push in ribbon as far as it'll go, and close. These connectors are quite delicate, be careful.

There is another type of ribbon connector which simply relies on friction. The LCD back-light cable is an example. You just pull it out with tweezers, and push it back with tweezers (without bending it, if possible).

The flash power lead D must be pulled up, away from the camera. Insert a tiny screwdriver underneath the wires at the point indicated, and pry up. 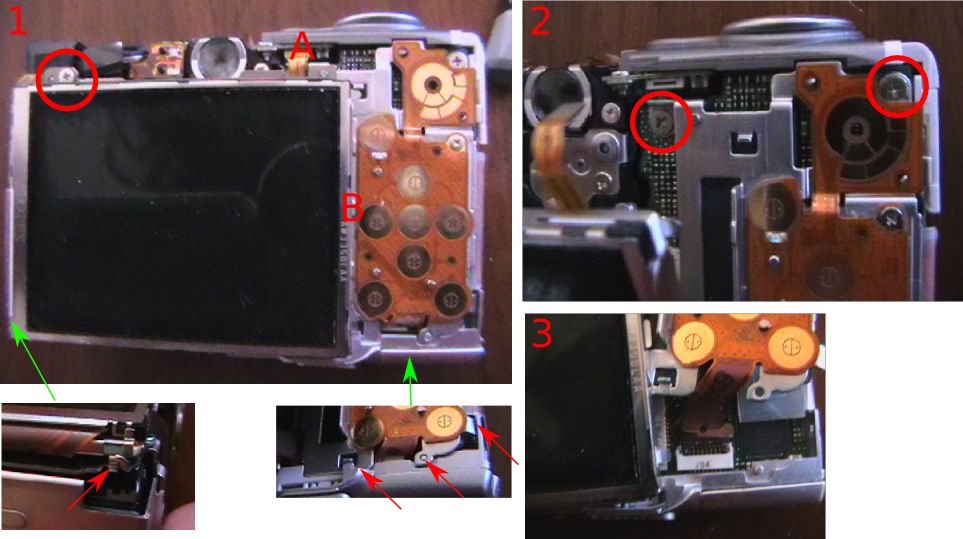 The buttons are a loose piece of rubber. Lift off.

The LCD needs to be removed first. Pull out the backlight power ribbon (A). Unscrew the screw above the LCD, releasing a bar. The left side has a small clip that needs to be released, and then the LCD-backlight assembly should lift upwards. The right hand side has a lip under the keypad module, so lift the left side first. You won't be able to disconnect the LCD ribbon until you remove the keypad plate.

Unscrew the 2 screws at the top of the keypad plate. There are a few clips holding the bottom in place (arrowed). But you should be able to pull the plate away, revealing the ribbon connectors for both units. Unplug them both.

The Flash unit can now be removed. Unplug the cables shown earlier, as well as the screw on the bottom right-corner. The ribbon plugs into the flash unit, unplug (C).

The left two screws on the back (red) will release the flash unit.

Before unscrewing the optical assembly, open the CCD ribbon connector (A). When re-attaching the module, the cable should again be inserted first, and locked last.

The three (green) screws on the metal frame will release the optical module. Beware a tiny spring hiding under B. Lift it out, and store it. 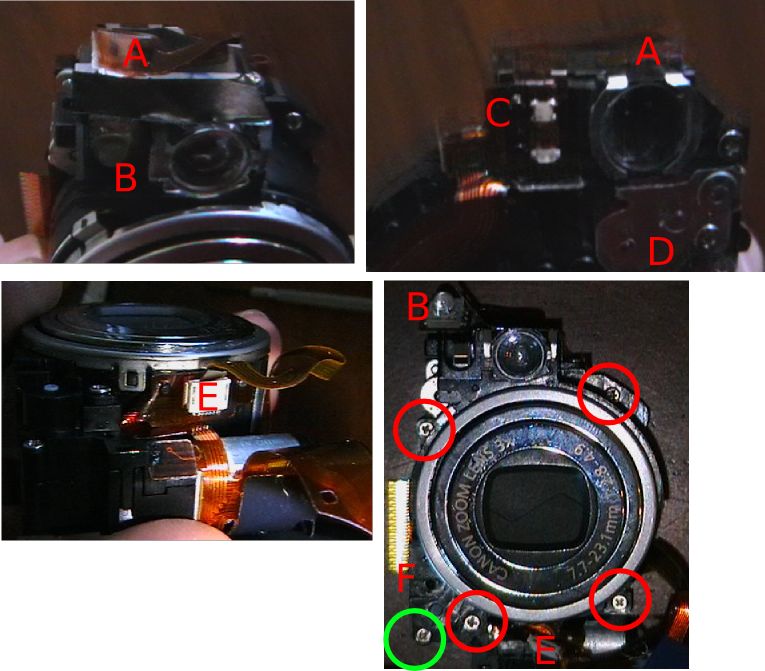 Before we can take the Optical assembly apart, the focussing LED has to be removed. Unstick ribbon A, and pry up the LED (B). Continue lifting the ribbon, unsticking the status LED section (C), too.

While we are here, the focussing servo's cogs are under D, if you are cog-cleaning. Don't open if you don't need to.

Unplug (pull) the shutter-ribbon from E, and unstick E's ribbon from the lens-body.

The lens and viewfinder assembly can now be removed from the base-plate with the CCD and motors. Unscrew the 4 screws and one on the base. The long screw comes from near F. Lift up the lens carefully. A small black cog will be loose near F. Remove and store.

The green screw gives access to the zoom servo's cogs. Don't open unless you need to.

On the CCD base, the sharp bit (A) activates the lens-cap mechanism in the lens, when it's closed. The lens element (B) is for focussing, and in my case it's sitting at an odd angle, because the short pin (circled) had broken, and had to be glued back in place. This pin passes through an IR light-switch when the lens is at a certain hight, allowing the camera to calibrate its focus.

Check that the focussing element moves up and down smoothly when you rotate the thread below A.

While you are here, blow any dust off the lens and CCD below it. 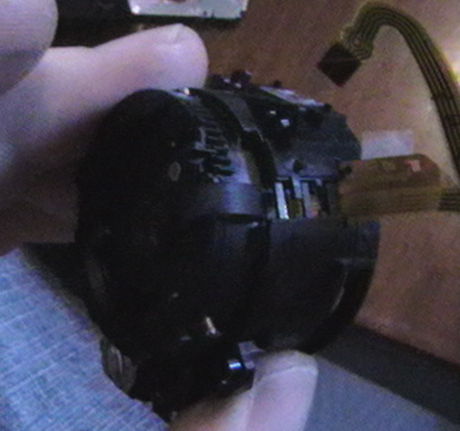 To disassemble the lens: Un-thread the ribbon. Roll the big cog on the side until it's fully closed, and clicks, revealing the pins of the inner rings, and push the outermost interior ring of the lens backwards from the front. It should pop out.

The rings either simply pop out backwards, or have a track leading to the surface. Clean all the tracks and pins.

If you are having shutter-trouble, you can open the innermost module, but beware it's delicate. If the lens-cap is jamming, operate it a bit with a screwdriver (wiggle), blow air at it, etc until it works cleanly.

Finally, if you found your problem, reassemble.

Remember to rethread the lens ribbon before you attach the outermost ring. The lens should operate smoothly when zoomed with the big cog. It's easiest if you attach it to the CCD plate in the opened state.

The camera behaves well, and can be tested disassembled. If you are having E18 trouble, you can just connect the lens to the motherboard, insert the battery, and turn it on. If it's working, the lens should open, and close when turned off (and the power button LED should go out promptly, if it doesn't you haven't found the trouble yet).

Enjoy your newly fixed camera. I am, mine.